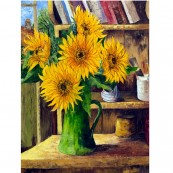 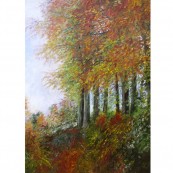 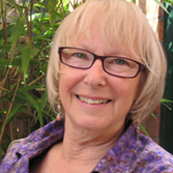 Christine Gaut has the ability to inspire - whether it is through her personality or her canvas. She has always aspired to be an artist. Her elder sister went to Hornsey Art School and she longed to go herself but her father would not let her. Encouraged by her mother who was an embroiderer by profession, Christine spent years working with fabrics in needlepoint, patchwork, applique, wall-hangings, dressmaking and soft furnishings.

Originally trained as a Mayfair hair stylist, Christine finally fulfilled her ambition to becoming a professional painter at 51, when her three children had all flown the nest and she had moved with her husband Peter to a chocolate-box cottage in the Cotswolds. She now has six grandchildren.

Christine has attended master classes with Sue Wales at her studio in Bath. She is mentored by her sister Frankie and her brother-in-law Colin, a former Master of the Fine Art Guild. She has worked on commissions in pen and ink, colour wash, watercolour but her preferred medium is oil where the ability to use the drama of light and dark gives her the greatest freedom to express her love of light, colour and form. Favourite subjects include places around the Cotswolds, cottages, trees, flowers and birds.

As well as having her own annual exhibition in the centre of Stroud, Christine has exhibited at Open Studios in Stroud, Faith in Art, Christ Artisans and New Wine and has paintings in France, Spain, Australia and the USA. Christine has featured in articles in Stroud Life and Artists and Illustrators magazine and Katie Fforde’s book ‘Wedding Season’.

Christine and Peter now live in Stroud to be nearer the town, be more involved with Stroud Christian Fellowship and to be at the heart of the local community.